The final USMS Open-Water Championship of the year - a 10K at Morse Reservoir in Noblesville, Indiana - was impeccably organized, highly competitive, and set in a gorgeous location. In short, everything a successful open-water event should be.

But Dick Sidner and NASTI went above and beyond. From the boat tours of the course, the loaded goody bags, the detailed pre-race briefing, the generous sponsor gifts, to the efficient hydration/feeding procedures, the friendly and encouraging volunteers, the large shade tent, the delicious post-race lunch - all the details were just right. One expects a certain amount of fly-by-the-seat-of-pants organizing at open-water events, but this one was smooth from start to finish. 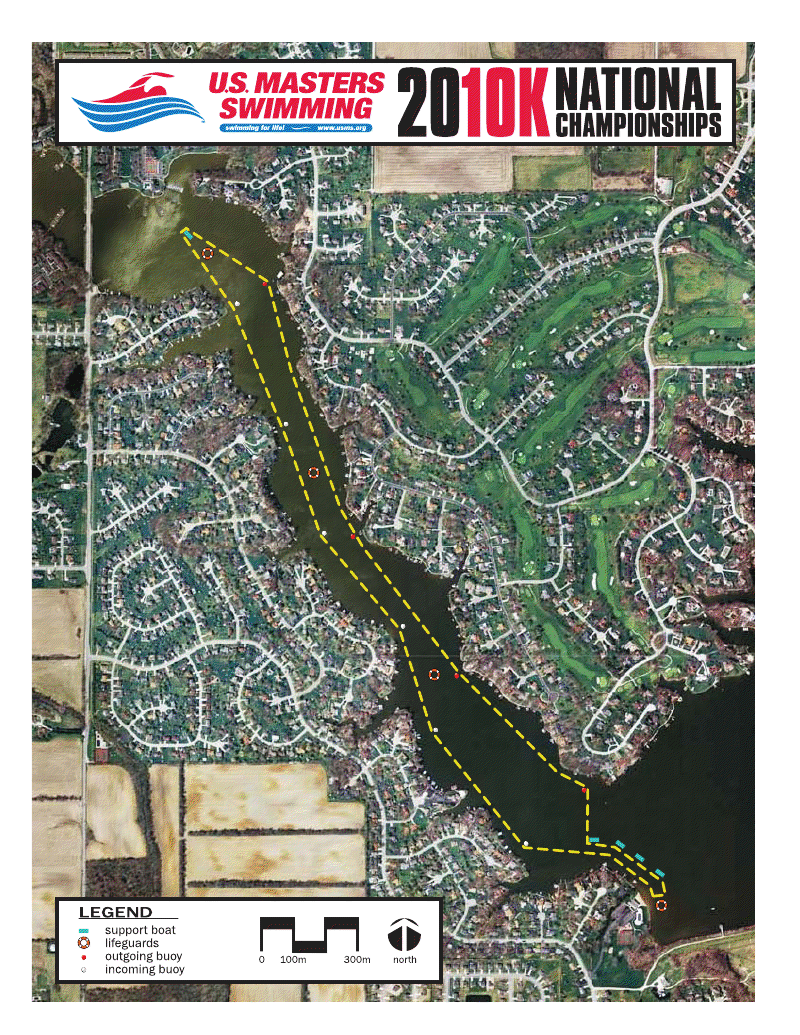 A 10K swim, like the marathon run, is not designed to be a pleasant experience - even for the best in the world. This particular marathon swim featured a complicated course and close-to-unsafe water temperature of 84-85F. But that’s the beauty and challenge of open-water swimming: Conditions are unpredictable, and one’s adaptation to them can be as important as speed and conditioning.

The race began, in a way, the night before, when several local volunteer boaters offered tours of the course. From the start just off the beach at the South Harbor clubhouse, the course ran parallel to the beach for a couple hundred meters before making a sharp right turn toward the opposite shore. The course then followed that shore, from point to point in a northwesterly direction, until it reached the top of the lake. At a large turnaround buoy (~2.5K) it reversed direction and followed the opposite shore, point to point until it returned to the South Harbor beach. For the 10K, swimmers continued for a second lap.

On the one hand, you couldn’t get too far off course - essentially, you were asked to follow one shoreline, then turn around and follow another shoreline. On the other hand, these were not straight shorelines, but rather a series of points and coves. If you literally hugged the shoreline the entire way, instead of navigating the straightest course from point to point, you could potentially add several hundred meters to your 10K.

So, instead of making 90-degree turns at each buoy (like the Olympic 10K course), you had to negotiate many slight changes of direction and a couple large ~180-degree U-turns. Even trickier, the buoys (large “can” buoys at each end with small “pumpkin” buoys in between) didn’t always indicate the straightest line! The buoys only represented points you were required to keep on your left shoulder. So, while you were always swimming between the shoreline and a buoy, sometimes the straightest line passed closer to shore, and other times it passed closer to the buoy.

Another twist: The small pumpkin buoys, already difficult to spot at water level, were often located quite far apart. So, instead of sighting buoys, it was often easier to sight landmarks (points, docks, houses, etc.). In sum, trying to race this course cold turkey would have been borderline unfair. Hence the pre-race boat tours. These tours, as I soon realized, were very important - assuming, of course, that you wanted to swim 10K rather than 11K. I even took a second tour, and was glad I did.

A pre-race briefing followed - a well-executed affair during which I caught up with friends-of-the-blog Sully and Rob D. Then, off to bed; an early morning awaited.

At 5am, I pushed myself out of bed, plugged in my headphones (in a 2-hour+ swim, you don’t leave the music in your head to chance), and started eating. Nothing was open that early Saturday morning in Noblesville, so we hit up the grocery store the previous evening. Clif bar, granola bar, apple, banana, apple juice, and coffee - a combination of quick-release and slower-release energy, but most important, as much as my stomach could handle at that hour.

I was determined not to run out of energy. Once you bonk, it’s hard to go back. I had never eaten so much before an early-morning race, and it led to an interesting lesson. On the one hand, I never did run out of energy. I took some electrolyte drink at 5K and a GU gel at 7.5K - but even after the finish I wasn’t particularly hungry. On the other hand, I felt utterly craptastic during my warm-up and the first 10-15 minutes of the race (a critical time). I simply hadn’t had enough time to digest my breakfast. 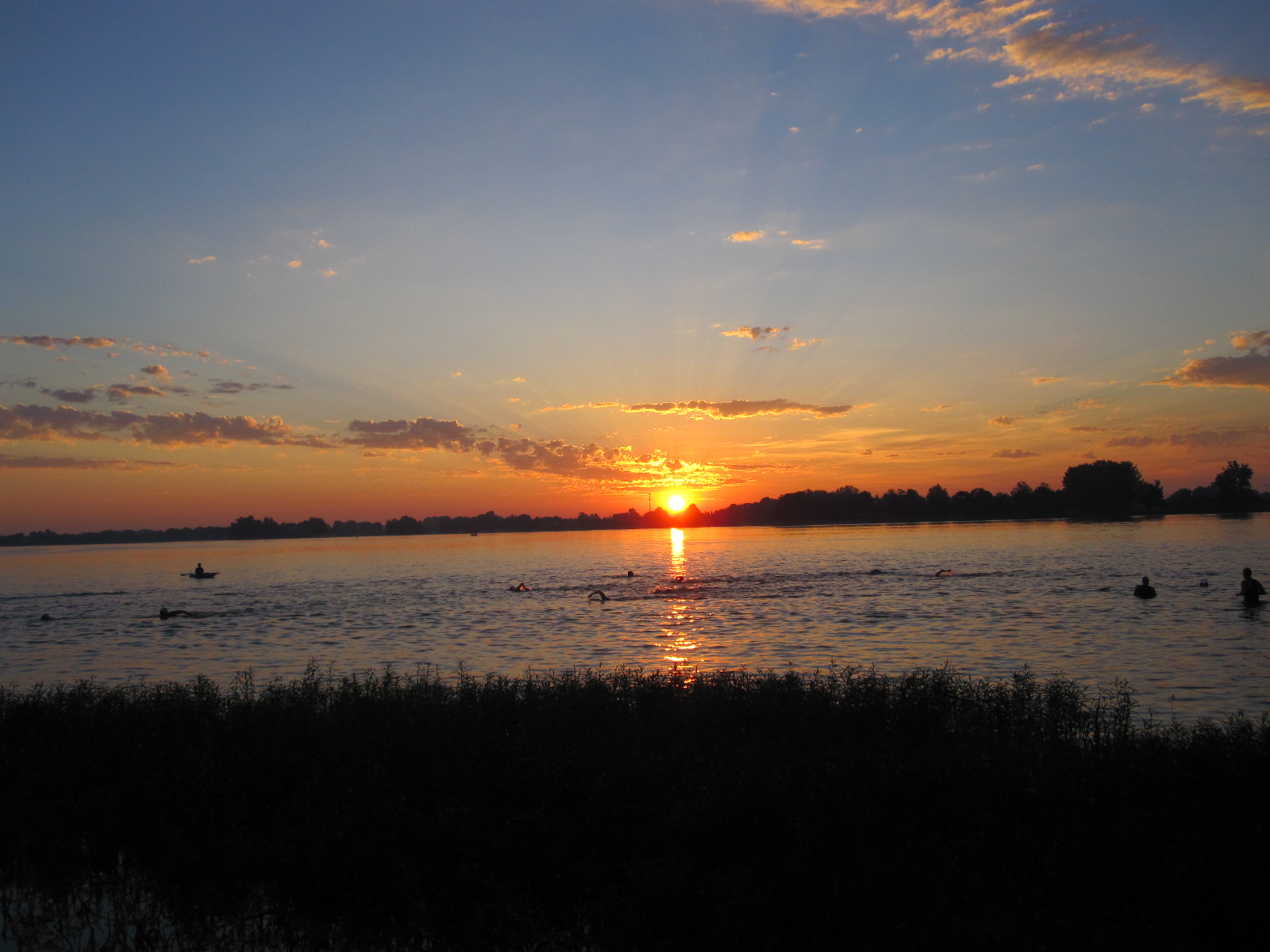 Warming up with the sun.

Cut to 6am: I arrive at the South Harbor beach as the first hints of morning are beginning to peek over the horizon. I run into Stephanie and Teri on the way in, and they mention seeing a guy with a shaved head, looking suspiciously like Sully, eating a pop tart. Suffice to say, we hadn’t expected Sully to be there. Read the full back-story at his blog.

“Hmm,” I said. “Well, he does like pop tarts.” And… there he was! On a day that had many wonderful moments, this might have been the highlight.

We set up camp on the grass and I downed, I’d say, at least 2 liters of water and gatorade. Given the warm waters, hydration was yet another challenge of the day. And also, another pitfall successfully averted. I never got dehydrated, and could even afford to skip the water boat at 2.5K when they parked it too far away from the turnaround buoy.

Cut to 6:25: I wade into the water to loosen up. I realize my body is currently focused on digesting my breakfast, and not particularly interested in swimming at the moment. Cut to 6:55: Still digesting. Uh oh. The first heat (top half of the field by seed time) lines itself up at the start buoy. I position myself at the edge closest to shore, to minimize incidental contact. 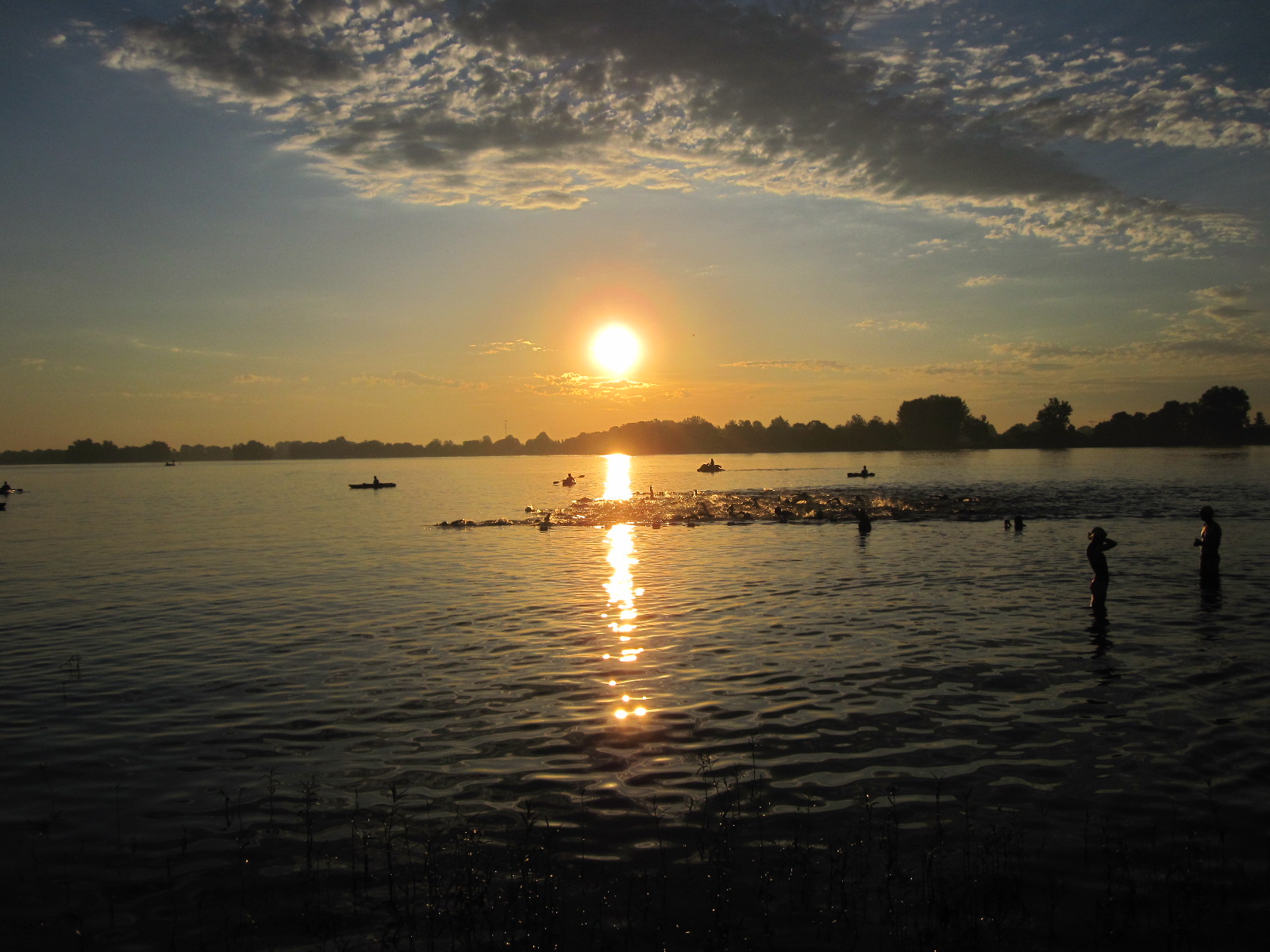 7am: We’re off! Several guys take an aggressive pace out to the first buoy, but I’m in no condition to follow. I let them go and just focus on a steady rhythm,  accurate sighting, and the song in my head. I’ll admit to some dark thoughts in these first few minutes of the race. This wasn’t how I had planned it.

A bit past halfway through the first 2.5K length, I was swimming with a group of 3-4 and started to feel a little better. My body had gradually begun to divert some of that digestive energy towards swimming. At the first turnaround buoy there were now three, one of whom swam over to the pontoon boat for water. I felt fine, skipped the water boat and started the 2nd length with the other guy (hey, Adam B!).

The back half of the course seemed a bit longer (was there a current?), presented more challenging navigation, but heading into the 5K I was still feeling good. I caught my split (1:06:52, pace of 1:20.2 per 100m) and aimed for the pontoon boat, where some friendly volunteers handed me my water bottle (Hammer electrolyte mix). Adam B. was a few seconds behind, though I think he passed me during the feeding. M. Mead arrived as I was leaving. Based on our respective split times, it appears I took about 16 seconds for the feed. 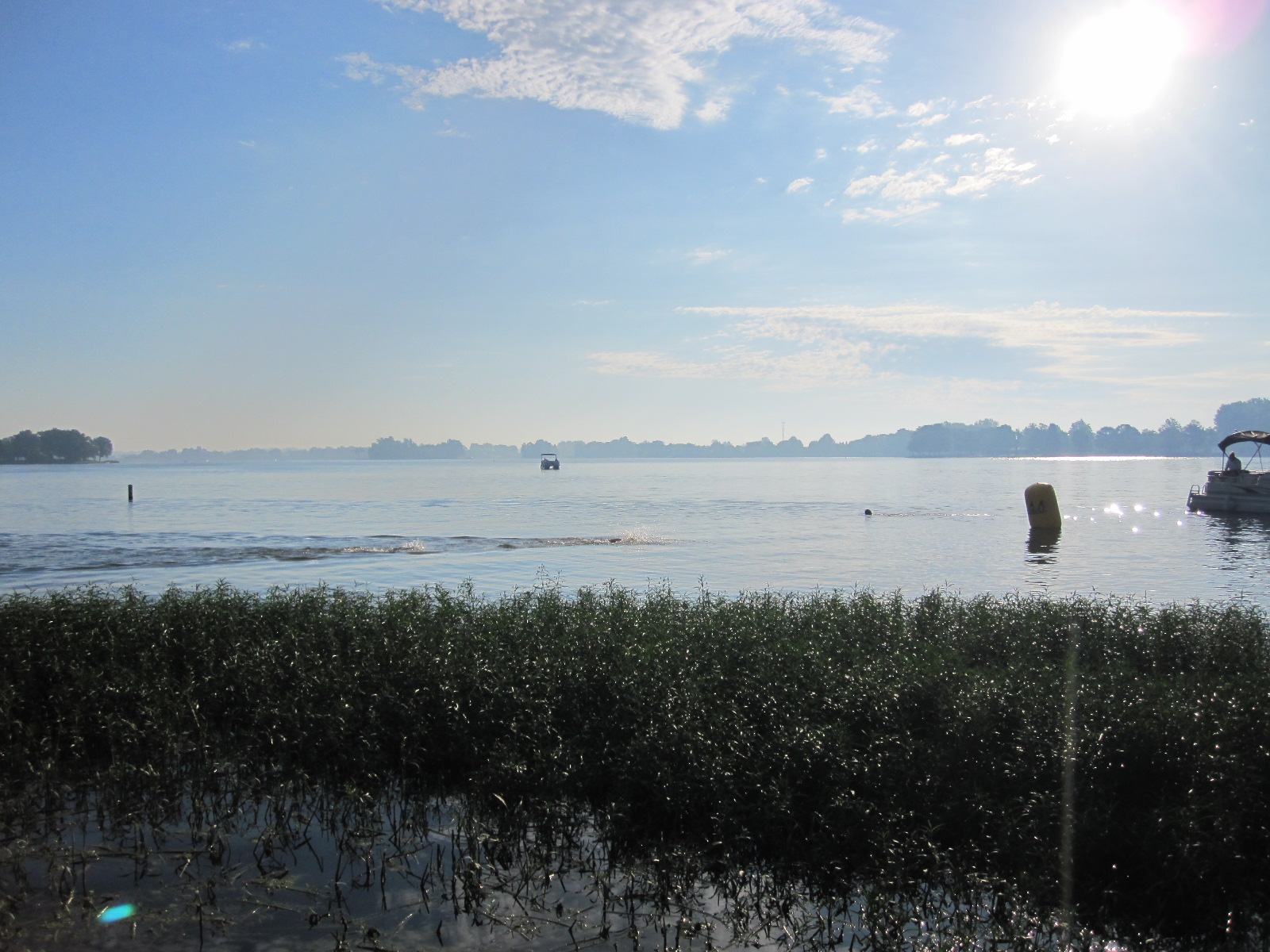 For the 2nd half of the race I swam almost entirely by myself. Which was just as well, as the water visibility was, oh, about 6 inches - making drafting more trouble than it was worth. It was also easier to navigate, without people kick-splashing in your face.

I still felt reasonably good heading into the 7.5K turnaround, though some fatigue had begun to sneak in at the edges of my awareness. This time, thankfully, the pontoon boat was parked right near the buoy so I stopped for some water and grabbed a gel pack out of my suit. “This is it,” I thought. One more length. I changed tracks on my mental playlist and aimed for the west shore.

About 10 minutes later (8-8.5K) the wheels came off. It happened rather suddenly and was, I think, exacerbated by the experience of an 18-year old girl blowing past me like I was standing still. (She negative split the race.) This wasn’t bonking, nor was it dehydration. It was, quite simply, muscle fatigue. I had reached the limit of my conditioning.

The usual symptom of in-race fatigue is a slower stroke rate. Either that or less efficient technique. I went with the latter (more painful) option. I resisted the slower cycle, so instead I just thrashed. It was the longest mile of my life. 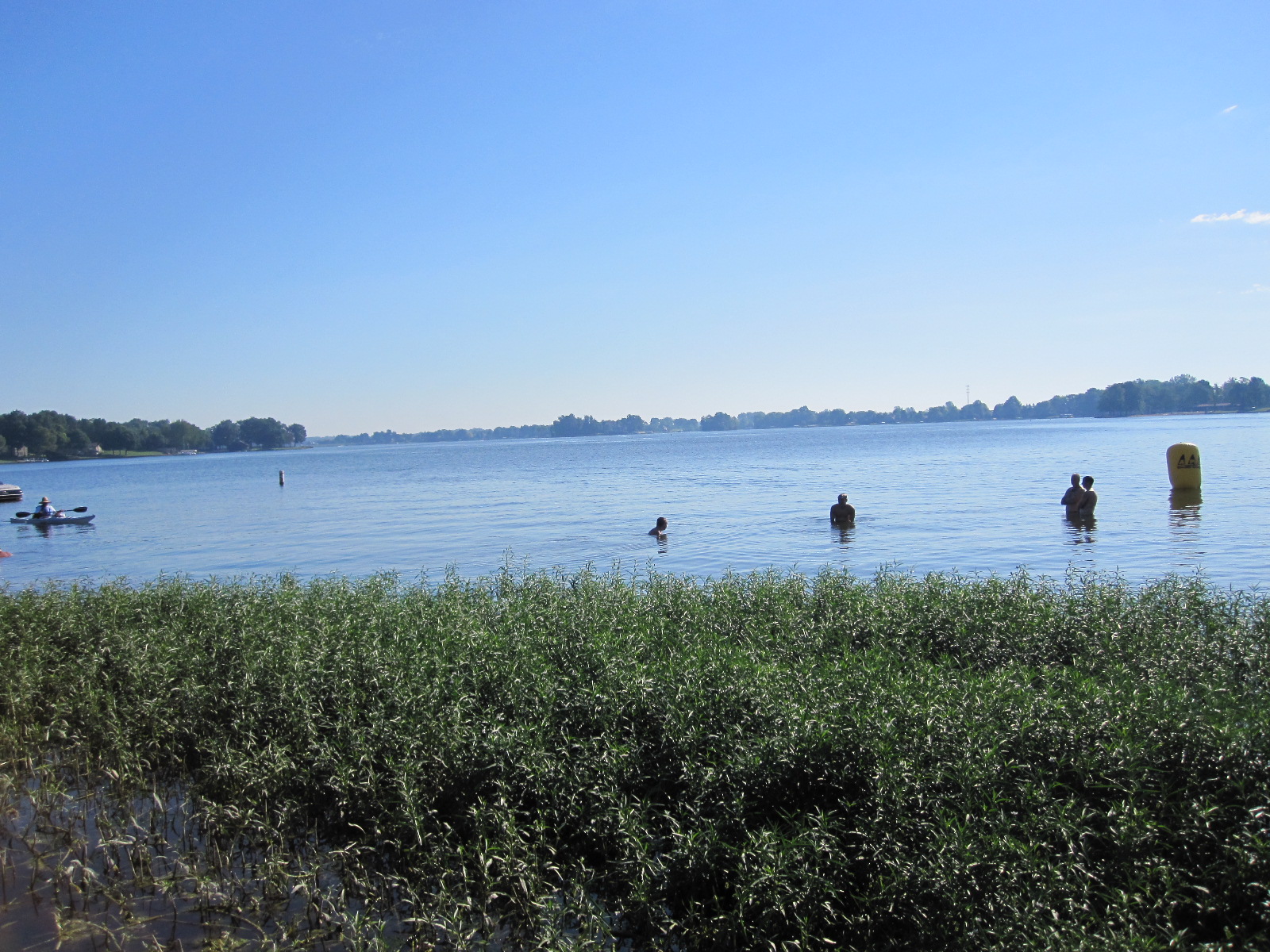 A dark time, indeed, but I could smell the finish; mercifully, no one else passed me. And frankly, I didn’t see anyone else finish who didn’t look like they hurt just as badly. My comrades in pain!

I limped my way through the finish, hollered out my number to the timers, and made my way over to the beach. On the way, I caught up for a moment with Adam B. and traded a few war stories.

I spent the next 3 hours watching people finish, replenishing fluids, eating lunch, and enjoying the company of friends. It was an incredible day, and a perfect way to cap the USMS open-water championship season. There’s lots of racing yet to come this year, but this was the big one. I’ll cherish every moment of it, including the most painful ones.