If I had to nominate a single, canonical marathon swim of San Francisco Bay, it would be the Round-Trip Angel Island

Start at Aquatic Park’s “swimmers’ beach” between the South End and Dolphin clubs, swim out into the Bay, past Alcatraz to Angel Island (3.5 miles), around the island (3 miles), and then back to Aquatic Park (3.5 miles). Ten “honest” miles by shortest route, crossing two shipping channels twice, and mostly perpendicular to the tidal flow.

The Round-Trip Angel Island (RTAI) is like the Round-Trip Alcatraz (RTA)…squared - almost literally, by distance. The 3.2-mile Round-Trip Alcatraz is an annual South End club swim - and Water World Swim organizes a popular public version called the “Swim Around the Rock.” A RTAI swim involves many of the same features and challenges as a RTA: scenic views, iconic landmarks, complicated currents, and busy shipping channels - requiring skill from both the pilot and swimmer. But the RTAI is three times the distance - a true marathon swim by any measure. 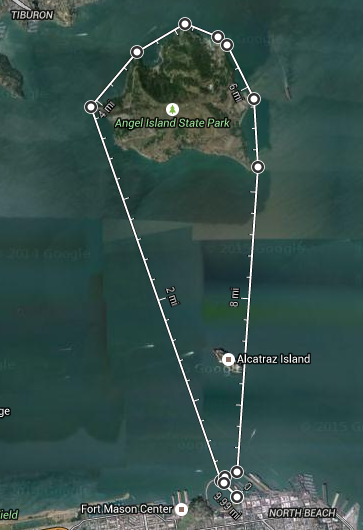 According to the best word-of-mouth history I could obtain, the Round-Trip Angel Island swim was pioneered in 1984 by Dolphin Club member Dave Kenyon, in a record that still stands today: 4 hours, 23 minutes. Dave was an incredibly fast swimmer who also held the Tahoe length record until 2017. Dave was followed in August 1995 by South End member Rick Barthels (first American to complete the Triple Crown). Until 2017, the RTAI was the exclusive domain of Dolphin and South End swimmers. But word has begun to spread in the broader marathon swimming community about this swim’s compelling aesthetic and technical features.

I compiled the following list of successful Round-Trip Angel Island solo swims (through year-end 2017), understood to have been completed nonstop, without being re-positioned, and according to traditional marathon swimming rules. Details included as available.

But, that’s not all. Dave started the race but had to swim back to the beach because of boat motor trouble. He then started a second time (one hour late on tides) and met 5-6 ft swells and conditions so rough around the island, that the paddler couldn’t stay in. A tremendous effort… 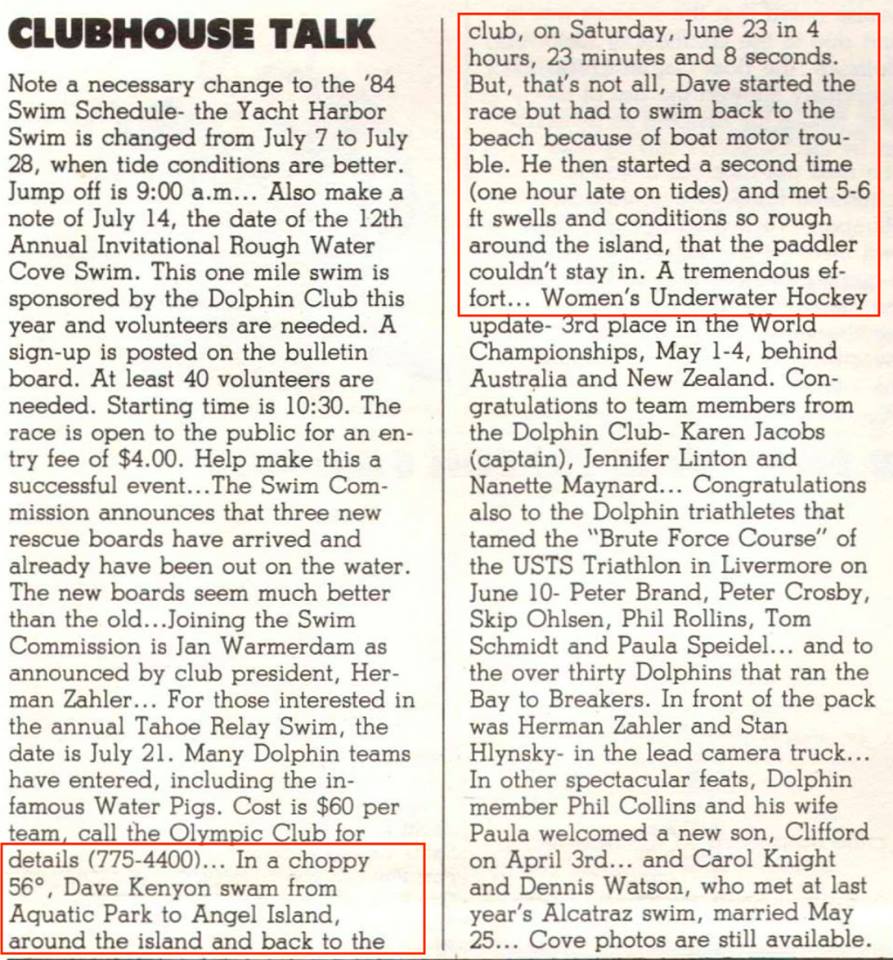 Thanks to Suzanne Heim-Bowen and Rich Cooper of the Dolphin Club for their efforts in researching Dave’s achievement.

Date Aug. 8, 1995, jump 4:08 am, finish 10:47 am., elapsed time 6hr 39min +/-. Conditions starting out were flat, no wind, course was clockwise from the club to the west end of Angel Island, passing Alcatraz to the west, visibility incredibly clear, water very comfortable at around 62 degrees, feedings consisted of Cytomax every 15-20 minutes. Pilots were Andy Field on kayak, Bob Roper and Mike Laramie in the avon. Somewhere approaching Pt. Blunt on Angel Island course was set toward Treasure Island/Bay Bridge to compensate for an ebb. Spent about 45 minutes swimming in place between Angel Island and the east end of Alcatraz, not sure why but I finally broke loose and headed toward the Ferry Building and caught the increasing ebb tide.

This morning I met the Sunrisers who were going to swim to Fort Mason. I felt low as I saw them get into the water and thought how come I could not be a normal swimmer? I was getting ready to swim a Club to club Round Trip Angel Island Swim! Bill James was my pilot. Tina and Susan greeted me just before I jumped and help get my Reptile Brain in gear as I went in backwards (7:12 AM) like I did in Tahoe.

Roper and Paddy Payton helped my plan the tide. Roper said I would have to fight the flood all the way to Angel Island then hopefully get a push to the north tip of the island near Ayala Cove (11:22 AM). It took me an hour to get past Alcatraz that was on my right side for a long time. Then I made it to the green Buoy (8:12 am). Then I was pushed east and Alcatraz was on my left for a long time finally we seemed to be making progress to Angel Island. It took a long time to make it past the first point on Angel Island. The water was warm 61 degrees! At times I was not real happy then I discovered if you close one eye 1/2 of the brain does not even know you are swimming. Then I started randomly counting strokes up to 1000. The water smoothed out and the Sun was warm as I rounded Ayala Cove. I put headed away from the island to be ready for the ebb as I headed South. It is really fun to look at Angel Island as you swim by!

Bill was amazing! I told him I had a leg cramp and he said I can’t do anything about that! LOL. I think I did too much running this week so my legs were not really swim ready! I got into a good zone as I progressed South. I hung up near Point Blunt and because of the fog could not really see where we were going. The wind picked up and white caps were all around me! I could see the North tower and eventually we slipped into the rough water farther South. It felt like a Water Massage. I was drinking a lot of Bay water!

At my last feeding at about 6 hours into the swim Bill said its getting too rough. Do you want to quit? I said no! About 15 min later Bill came over and said I’m calling the swim its over get in the Boat. I did not argue because I could see he was having trouble keeping the boat on course so I really was not sure where to go. I could only see the East Bay hills and the North Tower. I felt pretty good and was keeping in a good mental zone and I thing the waves were helping my sore muscles. Bill did a great call and if he had not pulled me I think I would still be out there!

Thanks Bill, Paddy, Roper, Susan, Tina and everyone else who sent me good energy during the swim! Jon Meyer was about to send out a rescue because he could see how rough it was getting!

Rick Barthels is the only one who has ever been able to complete this swim!

From the desk of Bob Roper: “Proof the reptile mind exists!”

The reptile really came out of its shell this morning: coming back from South Lake Tahoe, Tom swam a ROUND TRIP ANGEL ISLAND, in the phenomenal time of 10 hours, 2 minutes!

Starting out at 3AM at the shores of the South End Rowing Club, Tom (piloted by Bob Roper and Warren Wilson, in Warren’s “Tricaps”) swam to the east end of Alcatraz, and there to the west end of Angel Island. There he encountered the start of the ebb tide: he battled for almost two hours to get around the northeast of the island. He shot past Pt. Blount, and then encountered 3-to-4 foot waves! He made it 3/4 of the way to Alcatraz before getting caught in the back eddy off Alcatraz. But, by his sheer tenacity and NUTCRACKER upbringing he defeated Mother Nature and broke loose from Father Neptune’s grasp. After turning the corner at the east end of Alcatraz, he experienced the start of the flood: with the wind and the tide, Reptile was pushed down to Pier 41! (I was sure then that Tommy would throw in the towel!) He battled the increasing winds and tides and swam into the into the breakwater to the South End beach! Surely into the arms of 72 virgins!

At the end of the swim I asked Warren what he thought of tom’s Herculean effort, Warren just shook his head and said “F-g insanity!”

Tom will go down in Bay swimming infamy as the 2nd person ever to do this swim (his after a brave Tahoe attempt!): truly an exceptional feat! After he completed the swim, Tom passed up a shower and sauna and laid back in his viper car to regenerate his reptile brain! This goes to prove forever that there truly is a reptile mind!

It was a great swim under really perfect conditions, except maybe the windswept, mean choppy, final crossing from Alcatraz to the Club (“it’s just an Alcatraz…” I had to keep telling myself).  Rick Russel, a friend of mine did a great job of piloting in in his trusty little Zodiac, negotiating our way across the various shipping channels with constant contact with VTS and the captains. Tides were right and a shout out to Paul Saab  in Europe for pointing me to this date on tide calendar.

Hendrik Meerman started swimming from SERC at 4:00 AM to swim around Angel Island and back to Aquatic Park.  He finished at the club at 8:46 AM.  Mike Tzortzis expertly guided him from a Kayak and Irene Chan ensured that he was given timely feedings so that he could continue swimming at an amazing pace.  The winds were very light.  The biggest concern was the fog.  We had to navigate by compass from Pt Blunt to Alcatraz.  It was a great adventure.

Piloted by Paul Saab in the inflatable “Big Red.” Observed by Evan Morrison.

Cathy entered the water from the South End beach at 4:10am, just after slack at the Golden Gate. It was quite dark, with patchy fog obscuring what little illumination the quarter-moon offered. Paul deftly piloted us past Alcatraz and toward Pt Stuart. Cathy made good progress with little resistance from the building flood, and we reached the mouth of the Raccoon Strait in 2 hours, 10 minutes. The flood swept us through the Strait and we reached the top of the island at 6:50am.

Swimming down the east side of the island in the lee of the wind, the Bay waters were breathtakingly glassy, reflecting the glow of the pre-sunrise. We passed Pt Blunt at 8:10am and were immediately pushed east by the flood. We crabbed back toward Alcatraz as the sun rose on a gorgeous San Francisco morning.

The wind picked up a little as we passed Alcatraz, and we remained watchful for approaching boat traffic. Cathy continued making good progress despite the wind chop. The current seemed to switch about halfway across the south shipping channel, sweeping us back toward Aquatic Park just in time to deposit Cathy along the breakwater. She turned the corner into the cove, and cleared the water at 10:20am as the first woman to complete the RTAI.