Elk Lake is a 405-acre glacial lake in deep wilderness, yet only a 40-minute drive from Bend. And what a spectacular drive it is - through seemingly endless alpine forests and past numerous snow-capped peaks.

Central Oregon Masters Aquatics (COMA) has organized annual open-water swims at this venue for a number of years - at least 15, from what I heard - and in recent years it has expanded to a series of five swims over three days. They call it a “festival,” and it is truly that: a grand, All-American celebration of nature and sport. 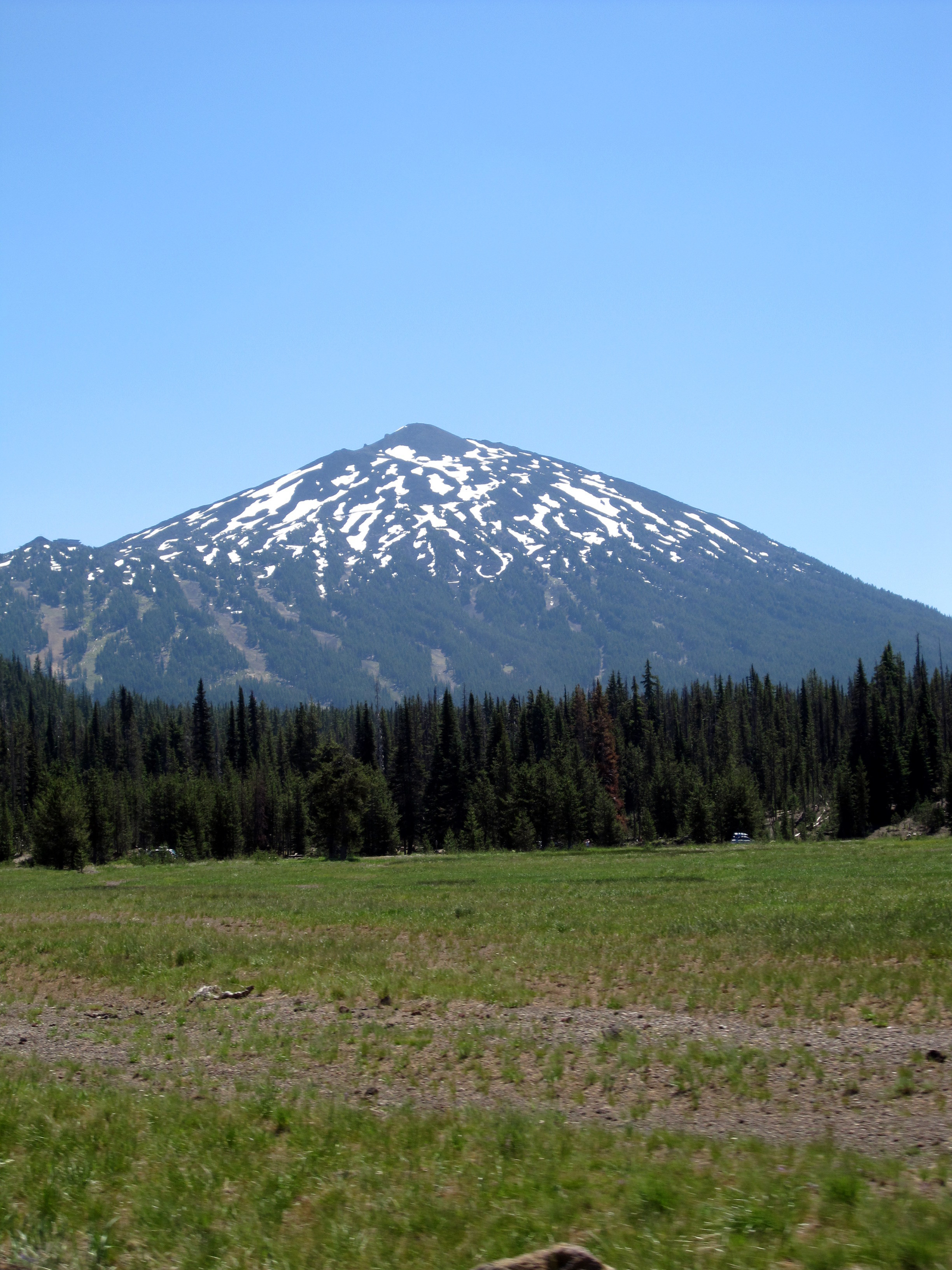 Elk Lake itself provides postcard-worthy views of South Sister, as seen here from the beach: 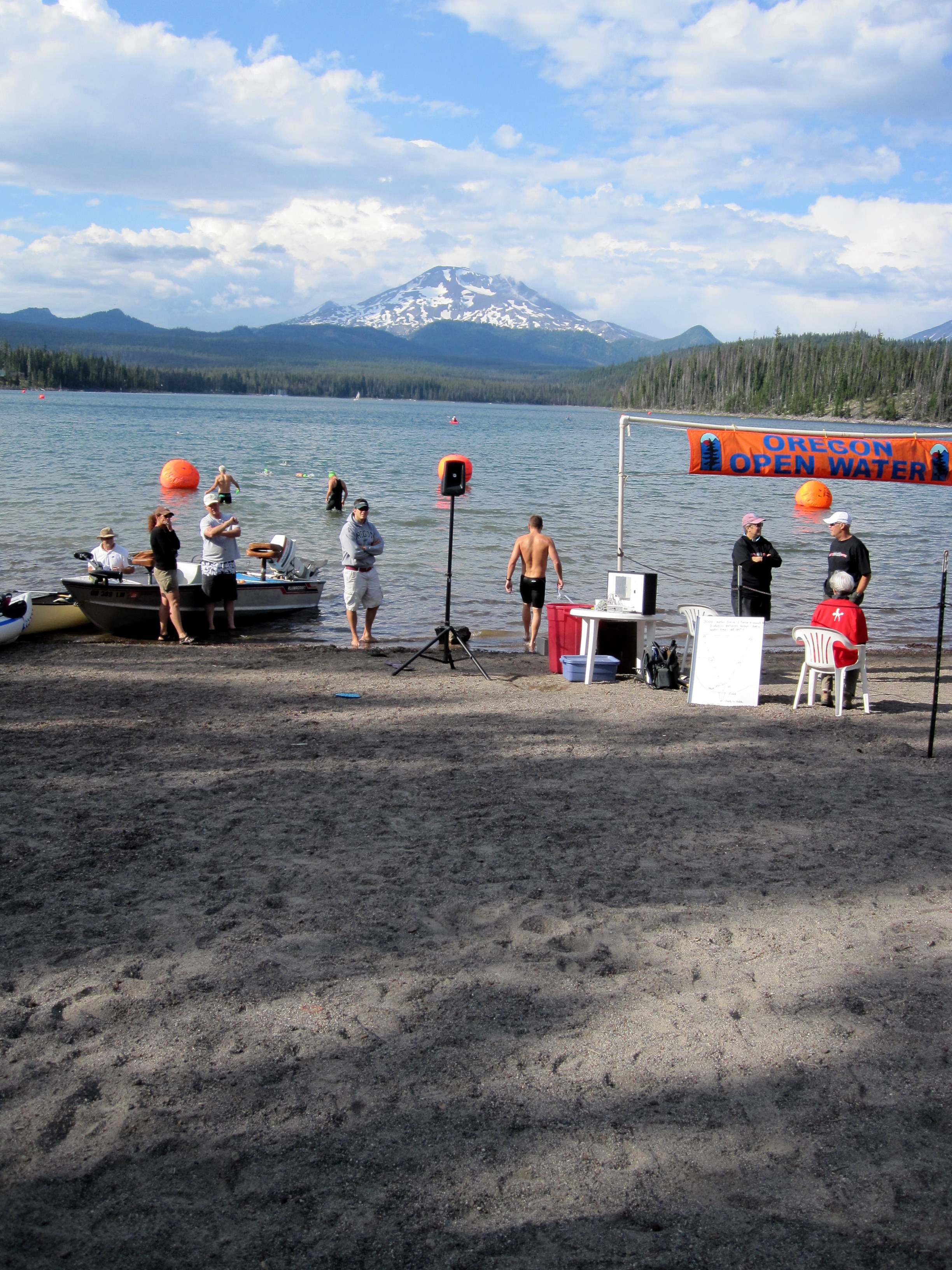 The mountain air can get chilly once the sun goes down. It had been in the 80s in Bend that day, and I hadn’t thought to pack anything more than shorts and a t-shirt. But at 4,900 feet elevation, with a persistent mountain breeze and the sun lower in the sky, it was uncomfortably cold. Many of those standing near me in the registration line had parkas and beanies. Thankfully the water was warmer than the air - the official measurement was 68F.

Finally, at 4,400m, I had my opening. Approaching the final turn buoy before heading back to the beach, I pulled up alongside B70 guy and found an inside line to the buoy. Once I rounded the buoy I had opened up a half-bodylength lead. Wetsuit guy started to make a surge and came up on my right; B70 guy was behind and on my left. I wasn’t really paying attention to navigation at this point - I had the middle position, so I could see right away if anyone changed course.

Eventually I lifted my head and noticed we were way off course, heading toward the west shoreline rather than making the diagonal back to the beach. I made a quick move to the left, which had the effect of putting a quick bodylength between me and wetsuit guy (who had been on my right). Now both guys were out of my field of vision, and it was a drop-dead sprint to the finish. At the end of a 5K, that’s a special kind of pain.

B70 guy managed to stay on my heels, though, and when my hands started to brush the sandy bottom (about 15m from the finish chute) I raised my body up and realized I wouldn’t be walking into the finish. With my bionic (i.e., titanium & plastic) hip, I have very little in the way of land-based speed, so B70 guy gained on me quickly. Once I hit dry land, though, I did a quick hippity-hop and crossed first by a couple of steps, in a time of 1:06:14. One second ahead of B70 guy and 8 seconds ahead of wetsuit guy. Pace per 100m was 1:19.5 - faster than both my 3K and 1.5K - despite the wide path we took on the final lap.

After the dramatic 5K, the final race of the weekend felt almost like an afterthought. For this race, they set us off in heats of 10, fastest to slowest according to the 500y seed time. From an in-water start, we would make our way along the west shoreline between irregularly placed buoys, before making a sharp right turn back toward the intermediate 300m sighting buoy from the previous races. From that point, it was a straight shot back to the beach. Once again, three of us separated from the field: myself, “B70 guy” from the 5K, and a 25-year old former D-1 college swimmer whose best times included a 4:25 500 free and 15:27 mile.

The young guy had a little too much speed in the end, and beat me by 7 seconds. Once again B70 guy and I found ourselves in a footrace, and once again I took him by a few steps. Final time of 13:53 - slowest pace of the weekend at 1:23.

The COMA Cascade Lakes Swims were a highlight of my 2010 open water season. It’s tough to say what next summer will look like, but it would make a great annual tradition.

One last thing: A special thanks to my parents, who joined me from SoCal for the weekend. If there were awards for swimmers’ “support crew,” they would have certainly taken first prize.

Could I ever get tired of this view?